The Transnet Phelophepa Health Care Train will arrive in Mossel Bay and will be at the Mossel Bay station to provide health care services to the Mossel Bay public from Monday, 25 August 2014 to Friday, 29 August 2014, and from Monday, 1 September 2014 to Friday, 5 September 2014.
The aim with the train is to support the Department of Health as well as to provide services that are not yet available at all clinics. The train is operated on a day-to-day basis by a team of health care professionals. Most of the services are free, although fees may be payable in some cases. It will, however, be minimal and the most that anyone will pay, is R30 for a pair of spectacles.
The services provided include a basic health education programme for community volunteers. The aim of this programme is to inform them on issues such as personal and environmental hygiene, oral rehydration therapy, immunisation, family planning, prevention of STD’s, HIV and AIDS, alcohol abuse and smoking. It is anticipated that once trained these volunteers will be utilised as support systems in communities to Community Health Nurses and Workers.
Another service on the train is the Roche Health Clinic, of which the main function is to do screening for health problems and to do health education.
The Eye Clinic on the train provides screening for visual problems and ocular pathology while there is also a Dental Clinic which provides oral health education as well as a range of dental services. The majority of the services are free, although there will some charges. People are advised to come early as they will be assisted on a first-come first-served basis.
Qualified psychologists as well as final-year psychology students man the psychology/counselling unit on the train and provide individual and group counselling. This team also provides workshops on request to social workers, nurses, teachers, community centres, hospitals, clinics, religious leaders, police and parents.

More information on the train can be obtained from Ms Haylene Claassen at the Mossel Bay Municipality at telephone (044) 606-5228 or 0846503970 or by e-mail at hclaassen@mosselbay.gov.za.

Come put some funk in your hair with beautiful hair wraps! Bead it * Wrap It * Feather It * We are running a lovely special till end of September. R100 for one Wrap & R180 for two Wraps! Whatsapp Misty 071 423 8756 for an appointment If you are concerned about finding a place for your child in 2015-2016 for Grade R /1, Global Academy will secure a place, if your child is placed in our Grade RR class.

The 2014 Grade RR class invites potential parents and children to visit them in Heiderand. 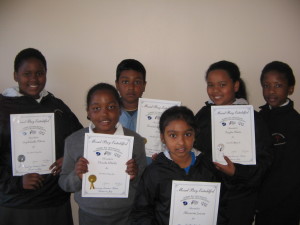 Six intermediate learners from Global Academy took part in the Mossel Bay Eisteddfod and received three GOLD and three Silver certificates. For some this was their first experience so the school is very proud of their efforts. 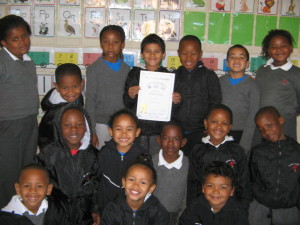 Global Academy’s Grade R class took part in the Mossel Bay Eisteddfod and received GOLD for their Choral Verse. This is their first experience of this kind and the school is extremely proud of them. 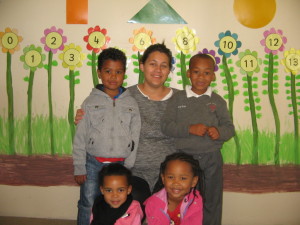 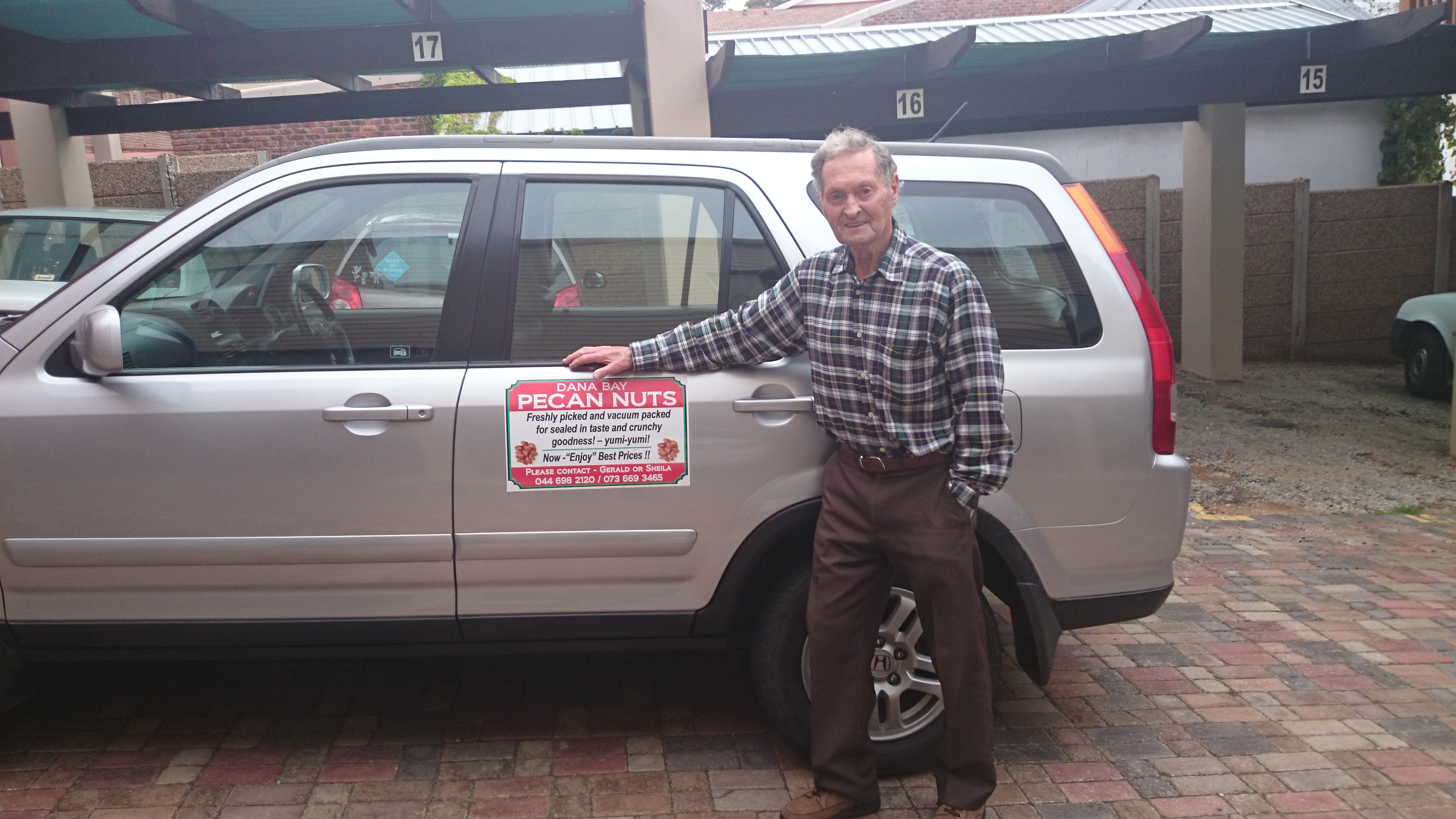 Describe your business in a short paragraph:
Selling Pecan Nuts
When did you start your business?
June 2013
What prompted you to start / buy your business?
Being health “nuts” ourselves we wanted to sell a healthy product and these nuts being high in Omega 3 oils seemed to be ideal and in great demand.
My business is aimed at?
The general public and in particular health conscious people and home industries (bakers)!
What products / services are you offering?
As above.
What is your competitive advantage?
A quality product at a competitive price.
Personal achievements:
We came to South Africa in 1964 from London U.K. and within 3 months opened a photographic studio in Kempton Park under the name of Glenn Photography – we specialized in Commercial, Industrial end Wedding photography.
Our professionalism and service was immediately appreciated and accepted by the community for 40 years but then we had to close because of crime, so we chose to come down to Mossel Bay.
What makes your business stand out in the crowd?
Quality of our product with good marketing and a passion for what we do.
Complete the following statements:
“ Through experience, I’ve learnt that…..”
It’s not what you say it’s what you do and honesty and friendliness is the best policy.
What is the most important message you wish to send to the community?
Being 81 and my wife 76 we like to talk health and NO.1 has to be, Stop Smoking NOW and start living a healthy lifestyle and enjoy the quality of life we are lucky to have in this fantastic town of ours – Mossel Bay – with its sunshine, beaches and its outstanding history.

Canines thrive in a pack because this is their natural form of living. They see your household and all the family members as their pack. The pack leaders are those who not only run the household, kids and everything that goes with it. These people are also those who protect and care for their canines, saying that, people forget that a canine is not only a cute, cuddly, furry family member of the pack but also a member of the pack who needs rules. Imagine yourself not implementing rules towards your children. They would hang on your television, jump on your sofas, play with balls and cricket bats inside your house, damage control would be taken far more often than n braai with friends. Why do we allow our canines to do as they please, then expect them to listen when friends come around, they jump all over them, lick them in the face and urinate in the house.

Then you can expect them to listen when you give them a command. Being a leader, to your canine, is a full time job and remembers folks if you treat your canine like a human; they will treat you like a dog.

South African born artist Laura Emsley is using postcards to connect the people of Europe with their African origins via her ‘Modern Minds’ exhibition, which was developed during a three-month-long residency at La Maison des arts Georges Pompidou. It’s been on show in the French town of St Cirq Lapopie (www.saint-cirqlapopie.co.uk) since the 6th of July, and is also a feature of the Lot Valley region’s Contemporary Art Festival.
St Cirq Lapopie is situated close to the famous Pech Merle Cave, which is decorated with rock art that dates from the Gravettian culture (which thrived more than 25,000 years ago), and possibly from the later Magdalenian era (18,000 years ago). The seven chambers of the cave sport lifelike images of woolly mammoths, horses, reindeer, and humans, as well as many abstract symbols. The system is one of only a few French rock art sites that are open to the public.

Mossel Bay’s Pinnacle Point Caves, on the other hand, have revealed the earliest evidence for modern human behaviour – dating to 162,000 years ago. This includes the systematic harvesting of seafood, the earliest complex technology (in which tiny, precisely made stone bladelets were embedded in other media – wood or bone – to create more efficient tools), and the earliest use of fire to anneal a raw material (silcrete), and so create a superior product from which tools were made.

With more than 40 scientists from around the world, and massive grants from the USA’s National Science Foundation and the Hyde Family Trust, the South African Coastal Palaeoclimate, Palaeoenvironment, Palaeoecology, and Palaeoanthropology (SACP4) Project is led by Curtis Marean, an associate director of the Institute of Human Origins and professor at the School of Human Evolution and Social Change at Arizona State University. It is the largest scientific project of its kind in the world today.

“In Europe, the common belief still seems to prevail that the modern mind with its ability to create symbolic form appeared there, out of nowhere, during the Upper Palaeolithic” (or Late Stone Age), said Ms. Emsley.

“The significance of the finds in South Africa does not seem to have penetrated the European public’s consciousness. The aim of this project is to disrupt this Eurocentric version and create a greater awareness of [humankind’s] links to South Africa.”

For her exhibition, Ms. Emsley made videos in both Pech Merle and Cave 13B at Mossel Bay’s Pinnacle Point, which is the focus of the SACP4 Project – an interdisciplinary study of the Middle Stone Age archaeology and other aspects of various caves in the Southern Cape.

She said that her project links the abstract markings seen on the walls of various European caves to markings on artefacts like those on the famous engraved ochre block that was found by the team led by Prof Chris Henshilwood (of the Institute for Human Evolution at the University of the Witwatersrand) at Blombos Cave in the Western Cape – and which accord with theories advanced by David Lewis-Williams in his seminal book, ‘Mind in the cave.’

According to Dr. Peter Nilssen, a consulting archaeologist who brought the Pinnacle Point Caves to the attention of the scientific community at the end of the 90s (when he and his colleague, Jonathan Kaplan, discovered the finds during a routine survey of the land that would become the Pinnacle Point Beach & Golf Estate), Ms. Emsley has focused her project on the use of the word ‘modern.’

“She looks at how the word defines ourselves and our concept of time, and how relics and art of the archaeological record connect our minds across the space that separates Europe from South Africa.

“In order to physically and symbolically make the connection between Pech Merle and Mossel Bay – and between Africa and Europe – Laura has created a limited edition of fifty works by adapting one of the Postcards from Pech Merle, with a painting of a mammoth on the front, and the label ‘Post-modern’ on the back.

“These are available at five Euros each, and the proceeds go to the trust that sees to the conservation of the Pinnacle Point Caves.

“Laura gets the buyers in France to address the cards to themselves, and to put them into envelopes which she posts to us in Mossel Bay.

“When we get them, we write a short greeting from the Point of Human Origins on each one, and stamp and post them back to their owners via the postbox at the historic Post Office Tree in the Bartolomeu Dias Museum Complex – complete with a special commemorative frank from the world’s South Africa’s oldest post office,” said Dr. Nilssen.

“The participants’ contribution to the preservation of the Pinnacle Point Caves is acknowledged through a listing on the Roll of Honour on Mossel Bay’s Point of Human Origins website – and the circle linking humanity across the planet is completed,” he said.