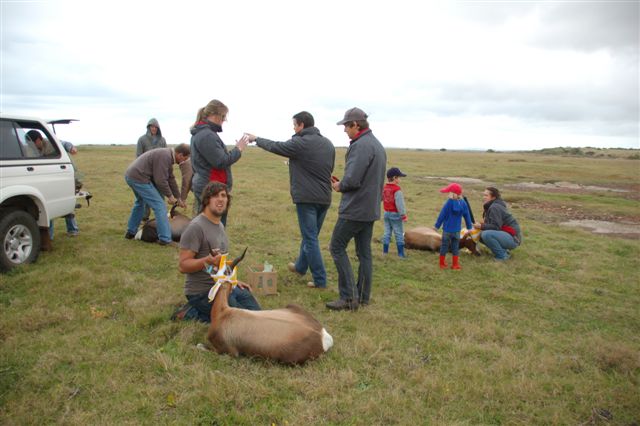 “Game capture has so many various forms and when we deal with endangered game, it is always advisable to use chemical capture. “Pinnacle Conservation is in partnership with PetroSA and we are currently managing the game for them, whilst still allowing students an opportunity to get much needed practical experience” said Aiden Beck.(Conservation manager).

The Bontebok ram capture took place on the PetroSA reserve, as there were surplus Bontebok (Damaliscus pygargus dorcas) rams. This has led in the past to cause them to start fighting over ewes. The competition between the rams is so severe that in some cases they obtain serious injuries or it can even result in death of the animals. As these are endangered species that are endemic to the Western Cape, it was given high priority to remove the surplus Bontebok rams, as soon possible. By doing this, it will eliminate the competition within these animals, and at the same time reduce some of the grazing pressures that they have on the veld too.

A successful day of chemical darting was held by the Pinnacle Conservation team, with over 5 Bontebok rams being darted and then tested (DNA samples). These DNA samples (which include: hair and blood samples) are then sent to the Zoological gardens of Southern Africa to be tested independently, which is required by Cape Nature. The animals are even required to be micro chipped now to identify them over and above the ear tags, for later identification. The students all had an opportunity to learn how to

take DNA samples, and how to work with these beautiful antelope.

Bontebok (Damaliscus pygargus dorcas) has a limited distribution and the IUCN conservation status is known as “vulnerable to extinction”. The Bontebok is one of the rarest antelope species in South Africa, which is the reason why they are considered to be vulnerable, as there are less than 3500 animals.

The average shoulder height for Bontebok is 90cm and they the rams weigh 62kg on average. They resemble the Blesbok in regards to size and their physical appearance, but there are slight differences that set them apart from Blesbok;
• Dark brown and glossy coat, where the coat of the Blesbok is a reddish-brown with no gloss.
• Bontebok’s white blaze on face is unbroken, while the Blesbok has a broken white facial blaze.
• Bontebok always has white buttocks and the Blesbok’s buttocks are usually pale.
• Bontebok are also slightly smaller than Blesbok browse. They graze mostly on the short grasses of the low-lying coastal plains and they prefer regularly burned veld. Bontebok are diurnal but are more likely to be less active during hotter midday hours. They are also seasonal breeders that mates from January to April and their gestation period is approximately 8 Months (230 – 254 days). Bontebok lambs have a mass of 6-7 kg at birth and have a pale to creamy colouration.There are roughly thought to be 11 pregnant Bontebok ewes at the moment, so the herd will increase in the next few months as the lambs are born.” •